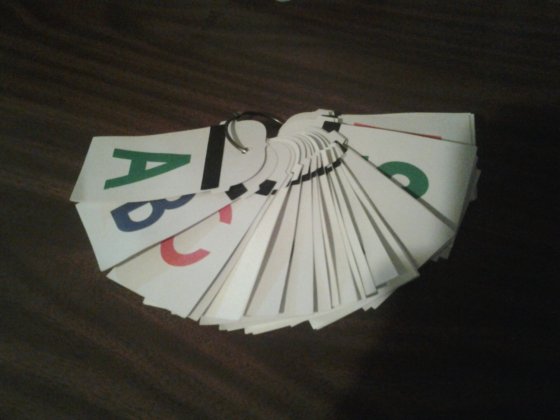 So I have 2 small kids one who just started school and one who is about to be 3 and I needed something that would help them both so I came up with the idea of flash cards with both the picture and the letter and it has helped them both. I let them help pick out the picture for each card and I must say they did a great job. It did take a bit to explain to them about each picture had to start with the letter on that card but once that part was over it was so easy for them to choose and I think they are great. I had to change the tag a bit because the one I used just wasn’t sturdy enough.

I also made the numbers one through ten for the cards. I will be adding them later to go all the way to 100 but wanted to start off easy with them. The  cards have been a big hit with the younger kids and I couldn’t leave the older three out So I made the State flash cards, they will be my next post.
I made all of the cards and the pictures using the Cricut Explore and a lot of different cartridges but I have a subscription so I was able only pay the $9.99 and make all of the cards. It really is a steal.

I will share all of the URL’s bu the cards are in groups of five so that way when you go to cut them all out it’s not like 100 mats. I cut out 2 tags for each card except the numbers so if you are doing both numbers and letters you will need 62 tags and if you are just doing numbers you need 10 and for only the ABC’s you need 52. I put all of mine on a ring so it would be easier to use and not lose any of them and it works very well for them to do hands on with the.

First I cut out all the tags and glue them all together into sets of twos. Then I cut all of the letters and numbers and for the ABC’s I only glue a letter to the front of the tag because the back is for the pictures. With the numbers I just glued them together in order fro 1 to 10. Then I started Cutting out the pictures and the name tags for each picture five at a time. I changed the colors on my set of cards but let it orignal on the links so everyone could choose their own colors. I put the picture together and glue it down and then glue the name tag down I already but everything into the correct size so all you need to do is cut and put it together. I hope everyone enjoys this project, if you have any questions please leave a comment below and also leave a comment letting me know what type of projects you would like to see.